"A micro-submachine gun. It is short-ranged, but very light in the hands. Its rate of fire tends to make up for its weakness.

The machine pistol is a slightly lighter, multi-shot firearm in RimWorld which fires 3-shot bursts of rounds which deal a low amount of damage each; a slightly shorter delay between each shot; a very short time between bursts; slightly shorter range and slightly higher overall accuracy.

Machine pistols can be crafted at a machining table once the blowback operation research has been completed; from

Machine pistols can also be purchased from outlander and orbital combat suppliers, outlander settlements, or obtained from the following raider kinds:

Despite its low per-shot damage, the machine pistol still has a respectable damage output owing to its excellent rate of fire, easily outclassing the autopistol, and even going toe-to-toe with the more expensive pump shotgun. Its very high close-up accuracy and the aforementioned fire rate also makes the machine pistol an excellent weapon for low-skilled shooters, as well as general close-quarters combat. The machine pistol's also very easy to acquire due to earlygame raiders often using it as well as its relative ease of manufacture.

Another result of the machine pistol's low per-shot damage is that it's very unlikely to outright kill humans, but any human that gets downed by a machine pistol will usually have many bleeding gunshot wounds that need tending. Therefore, it's advisable to use at least herbal medicine to be able to patch up multiple wounds per tend, unless you're confident that your doctors can patch each individual wound quickly enough.

The machine pistol is best suited as a close-quarters engagement weapon due to its high close-up accuracy and good damage output, and it's also a good weapon for hit-and-run tactics due to its burst-shot nature and very short warmup/cooldown cycle. Due to its low per-shot damage though, as well as its relatively short range, it's ill-advised to use the machine pistol as a hunting weapon since it'll easily send animals into a manhunting rage.

Against an unarmored human, a machine pistol can kill with 7 hits to the torso, 5 hits to the head or 4 hits to the neck; cripple or destroy limbs in 5 hits; and cripple or destroy eyes and digits with 2 hits. A single hit to the brain will cause debilitating brain damage, but typically won't kill unless the victim's consciousness hits 0%. It'll generally take around 11 hits (~8.3 seconds average) to incapacitate that human from pain shock.

Overall, the machine pistol is best paired with a careful shooter up to level 12, then with a trigger-happy shooter beyond that point.

Weapons that would typically supplant the machine pistol include the chain shotgun and heavy SMG.

This section goes over how well the machine pistol fares against comparable weapons (similar value, tech level or similar characteristics) in 1 vs. 1 combat.

Results in the tables below are the percentages of battles that machine pistols either won or tied against the weapon listed in the first column of said tables, with a sample size of 2,000 battles per result. Higher percentages are better.

The graphs assume a normal quality machine pistol against an adult human that's out in the open in clear weather. For DPS, projectile speed has also been factored into the equation, with the weighting based on the base amount of attacks that it'll take to put the aforementioned target into pain shock. 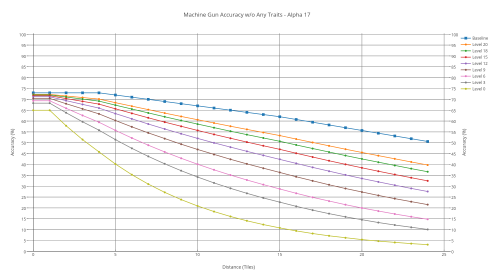 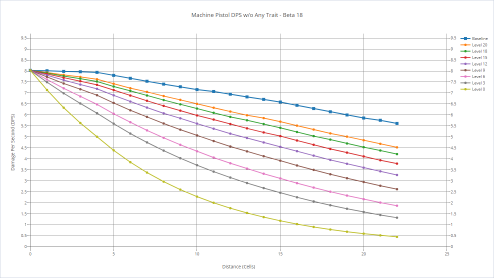 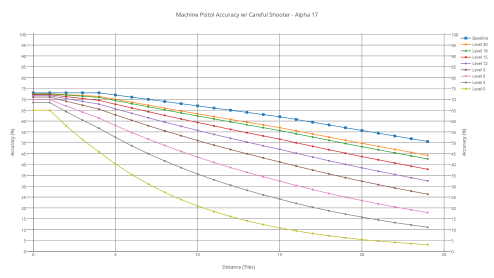 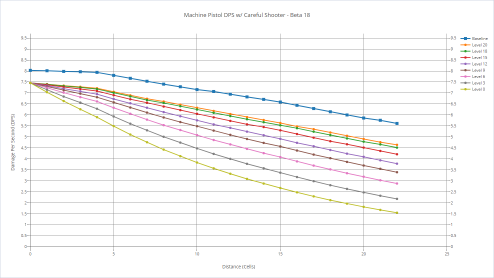 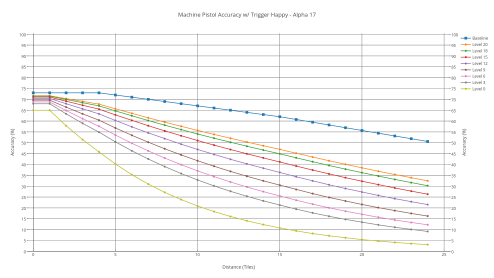 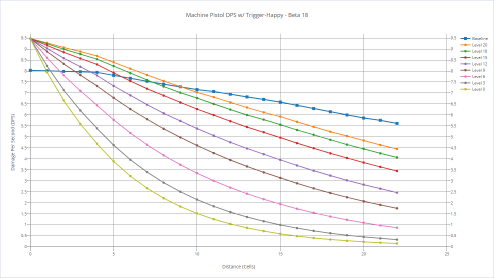