"An ancient design of precision sniper rifle. Bolt action. It has an exceptionally long range, great accuracy and good power. Because it's so unwieldy, other weapons outclass it at close range."

The sniper rifle is a slightly heavier, single-shot firearm in RimWorld which deals a high amount of damage per shot; a long time between shots; very long range and high overall accuracy.

Sniper rifles can be crafted with skill level 7 at a machining table once the precision rifling research has been completed; with

The sniper rifle has the longest range out of all ranged weapons in the game, along with excellent long-distance accuracy as well as a high per-shot damage. Stopping power is also high enough not only to stagger humans, but also slightly larger targets such as cougars and all insectoids. Like the pila and charge lance, the sniper rifle has somewhat of a reputation of maiming or even outright killing its victims.

However, the sniper rifle has a very slow rate of fire, resulting in it having the lowest sustained damage output out of all firearms except the incendiary launcher; it's only on par with higher-tier neolithic ranged weapons like the greatbow. Its accuracy at shorter distances (especially close) is also weak, making the sniper rifle one of the most skill-heavy weapons in the game - even the average shooter will struggle to use the sniper rifle effectively within its optimal accuracy range. Sniper rifles are also somewhat difficult to acquire unless you get raided by a group that solely consists of mercenary snipers.

Given its characteristics, the sniper rifle is undoubtedly very well suited as a medium-to-long distance support weapon, or for field combat (e.g. harassing siege camps) due to its unparalleled range and good stopping power. This weapon's also arguably the best choice for hunting due to its range and per-shot damage, with the only other hunting weapon rivalling it being the charge lance.

On average, the sniper rifle is best paired with a careful shooter up to level 14, then with a trigger-happy shooter beyond that point.

Due to this weapon's propensity for blowing limbs clean off targets, similar to the charge lance, it tends to make a poor choice if you intend to take prisoners after a raid, as any survivors are bound to be very heavily crippled.

The below graphs assume an unmodified shooter using a Normal quality weapon. 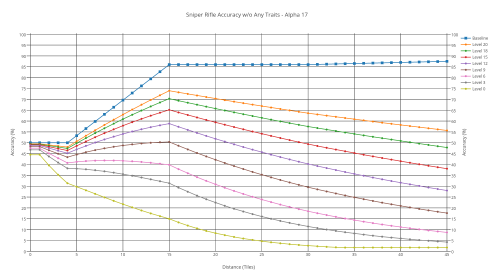 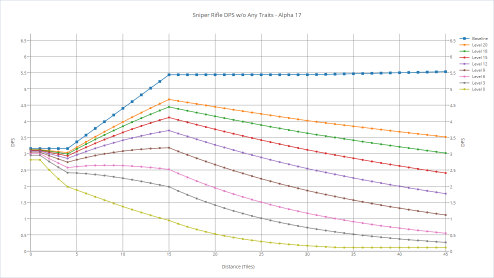 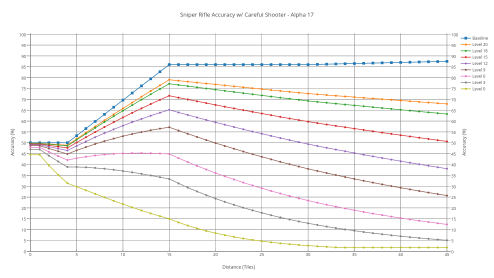 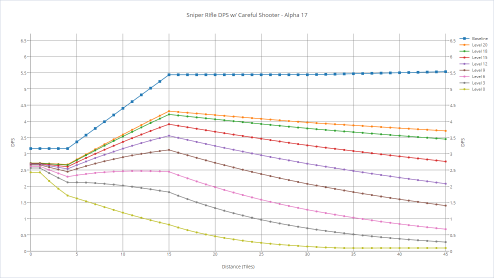 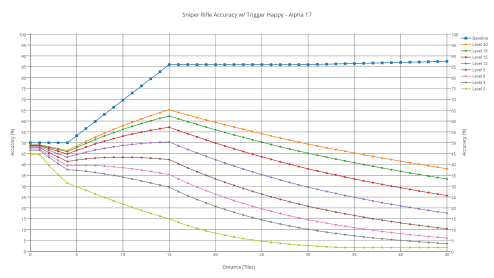 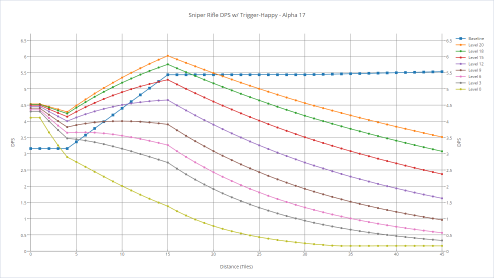