Old-school fragmentation grenades. They can be thrown a short distance, where they'll explode, damaging anything and anyone nearby.

Frag grenades can be crafted at a machining table for

Frag grenades have very short range, moderate aiming time, and a one-second delay before exploding in a 3x3 area, causes 50 damage to items and creatures, 200 damage to structures and terrain features, and 400 damage to walls. Their main benefits are the strong damage versus structures and large concentration of hostiles in tight areas. It offers a viable combat alternative for those with sight deficiency as it hits nine tiles at once, reducing target "miss" chances.

Usage without oversight is prone to vulnerable positioning, inefficiency against moving target and cause (some times) unwanted collateral damage.

Hostiles equipped with frag grenades are very dangerous, especially against your Mini-turrets and drafted (standing) colonists in cover, mostly because their casualties don't matter unlike player's colonists and will just charge forward without any care for their own safety, but of course will retreat under fire once half of their group has been killed or incapacitated. Players should pay attention to the "throwing" sound (a whooshing sound) and clear the area fast enough to avoid getting caught in its blast radius. A reasonably effective counter is to rush a grenade-equipped hostile with a melee weapon-wielding colonist. The hostile will prioritize the nearest target, since they are moving they will invariably miss, and then they will find themselves at a massive disadvantage in close combat. Another tactic that can be utilized is to find the frag grenade enemy, and focus fire on that pawn and only that pawn.

They are thrown with the same animation as of shooting, they cannot be used over walls and must have a direct line of sight. A circular zone will generate to indicate range, then another 3x3 indicator with a circular center will become the aiming spot. The character cannot hold both the grenades and another weapon at the same time.

Grenades will always land within 1 tile of their targeted tile, including on the diagonal, unless the path of the grenade intersects with a wall or object. When throwing a grenade down an 1-tile wide alley, a pawn can consistently throw a grenade 4 tiles, not including the tile the pawn is standing on, without intersecting the two side walls. Beyond 4 tiles, there is a risk of hitting the wall and dropping short. This can be relevant to prevent friendly fire or damaging defenses during combat.

Frag grenades strictly benefit from the Trigger Happy trait, as the Aiming Time bonus applies while the accuracy penalty does not. Similarly, the Careful Shooter trait is strictly detrimental. The Shooting skill of the grenadier is largely irrelevant, making frag grenades a good option for utilizing low skill pawns.

Frag grenades are especially useful in the melee blocking tactic. While enemies are bunched up on the other side of a wall, a grenadier can throw grenades over the heads of the blockers to deal massive damage to enemies. Just make sure that the extent of the AoE of the grenade is one tile away from the wall, as a mishandled grenade can blow a hole in the wall and ruin the melee blocking tactic. 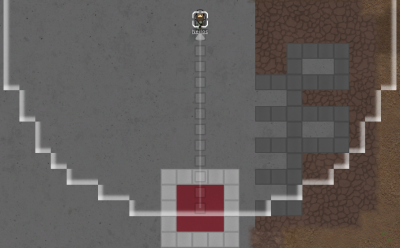 Frag grenades can also be used to clear dumping zones, though if you are clearing corpses it's better to light them on fire instead.