A charged-shot assault rifle. Pulse-charge technology charges each shot with unstable energy as it leaves the barrel. Released on impact, the charged energy greatly increases the damage done.

The charge rifle is a slightly heavier, multi-shot ranged weapon in RimWorld which fires 3-shot bursts of rounds which deal a slightly higher amount of damage each; a moderate delay between each shot; a moderate time between bursts; moderate range and slightly lower overall accuracy.

Charge rifles can also be crafted at a fabrication bench once the pulse-charged munitions research has been completed; from

Charge rifles can be purchased from outlander and orbital combat suppliers, or outlander settlements. Raiders never use charge rifles. A charge rifle is also the starting weapon in the rich explorer scenario.

Combining a solid per-shot damage with a 3-shot burst naturally makes for a dangerous weapon, which is exactly what the charge rifle is. Range is also fairly good for a multi-shot weapon, being identical to that of the LMG's. Armor penetration is also surprisingly high, being comparable to the sniper rifle's, despite the aforementioned weapon having a significantly higher per-shot damage.

Overall single-target damage output is the second highest out of all player-usable weapons in the game, beaten only by the minigun. Close-up damage output is weaker though relative to cheaper ranged weapons such as the chain shotgun, overall only being comparable to the heavy SMG - still decent in absolute terms though.

Accuracy is also fairly poor, being almost identical to the chain shotgun's. This means that the charge rifle sees a big advantage against large enemies, or even against tightly-packed groups of enemies - though higher-quality LMGs will still fare slightly better in these situations. Additionally, stopping power is lackluster meaning that the charge rifle can't stagger humans, instead being limited to the likes of tortoises and boomrats. The warmup/cooldown cycle is also quite long for a multi-shot ranged weapon, only being slightly shorter than the bolt-action rifle's.

Finally, the charge rifle is very difficult to acquire until lategame since its production requirements are high and because raiders don't use charge rifles.

Against an unarmored human, a charge rifle can kill with 3 hits to the torso, 2-3 hits to the head, 2 hits to the neck, or 1 hit to the brain; cripple limbs in 2 hits; and cripple or destroy eyes and digits with a single hit. It'll generally take around 5 hits (~9.7 seconds average) to incapacitate that human from pain shock.

Overall, the charge rifle is best paired with a careful shooter up to level 16, and with a trigger-happy shooter beyond that point.

The below graphs assume an unmodified shooter using a Normal quality weapon. 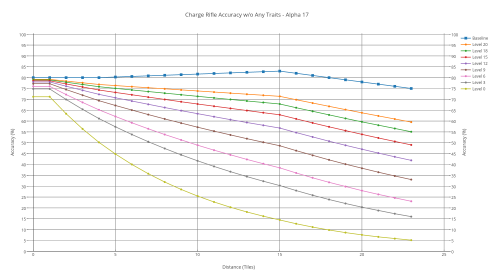 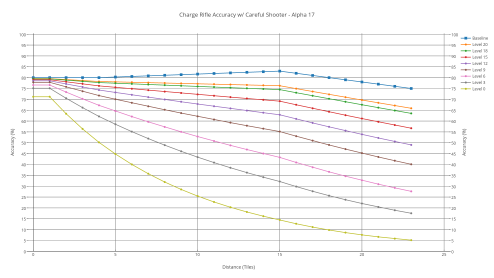 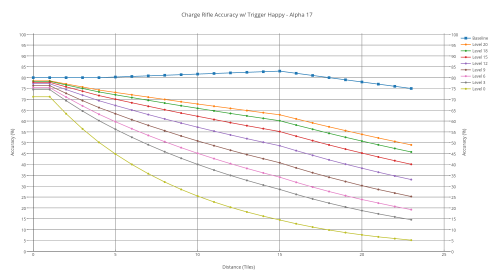 Charged-shot weapons are also referred to as Tokamak weapons in the fiction primer. They fire projectiles coated in a matrix of magnetically-contained charged particles. On impact, the energy in the particles is released in a very efficient explosion. These require high amounts of power to fire and are powered by hex-cells at small scales (like Charge Rifles), or fusion reactors in the case of large cannons.