Pila are spears for throwing. They take a long time to throw, but one hit can do heavy damage. This weapon represents a bundle of pila and can be thrown over and over. The singular of pila is pilum.

Pila are slightly heavier, thrown ranged weapons which deal a high amount of damage per pilum thrown. They have a very long time between throws, and slightly shorter range and slightly lower overall accuracy.

Note that pila, once equipped, can be thrown infinitely; they are not consumed by use.

Pila can be crafted at either a fueled or electric smithy once the Smithing research project has been completed. They require

There are two notable features of a thrown pilum. The first being its high damage amount (a double-edged sword in some cases), being higher than any other neolithic weapon's projectile and matching the sniper rifle. The second is their massive stopping power, only surpassed by shotguns and thump cannon, and not only able to stagger humans, but every other creature in the game except for following: Elephant, Megasloth, Rhinoceros, Thrumbo

Thanks to their aforementioned damage amount, as well as their tendency to strike internal body parts more often than other weapons, pila can easily maim (one hit can shatter a radius, femur, spine or cripple the pelvis) or even outright kill whoever's unlucky enough to be struck by them. This is a trait that's shared with the sniper rifle and the infamous charge lance. A thrown pilum's velocity is also very slow as to be expected, but the impact on overall DPS is relatively low in this weapon's case due to its extremely long warmup/cooldown cycle.

The Achille's heel of pila is undoubtedly their aforementioned warmup/cooldown cycle; missing a throw can be costly not only because of the long time between throws in general, but also because that colonist will be unable to perform any actions for the entire 4-second cooldown duration. As a result, pila are the worst neolithic weapons in terms of damage output, and even the short bow bests pila in head-on fights. On top of that, a pilum has the shortest range out of all neolithic weapons, and only outranges both shotguns in-game as well as all grenade variations. Armor penetration and close-up accuracy are also both very poor, with the latter making it less-than-ideal to equip low-skilled shooters with pila.

Pila are also the heaviest neolithic-tier ranged weapons, rivalling even somewhat heavy rifle-class firearms. However, this weapon's mass should still be low enough to not have any significant effect on the wielding colonist's ability to carry items in a caravan.

Pila are more suited towards being supporting weapons in combat due to their stopping power and ability to disable targets, since their DPS is simply insufficient to effectively assume a head-on engagement role. Hunting's also a bit of a mixed bag: while the per-hit damage is great for this purpose, the pila's long cooldown along with its short range means that problems could arise if the quarry turns manhunter.

Against an unarmored human, a pilum can kill with 2 hits to the torso, 1-2 hits to the head, or 1 hit to the neck or brain; cripple or destroy limbs in 1-2 hits; and destroy eyes and digits with a single hit. It'll generally take around 3 hits (~39.8 seconds average) to incapacitate that human from pain shock.

Overall, pila are best paired with careful shooters up to level 6, then with trigger-happy shooters beyond that point.

This section goes over how well pila fares against comparable weapons (similar value, tech level or similar characteristics) in 1 vs. 1 combat.

Results in the tables below are the percentages of battles that pila either won or tied against the weapon listed in the first column of said tables, with a sample size of 2,000 battles per result. Higher percentages are better.

The graphs assume normal quality pila against an adult human that's out in the open in clear weather. For DPS, projectile speed has also been factored into the equation, with the weighting based on the base amount of attacks that it'll take to put the aforementioned target into pain shock. 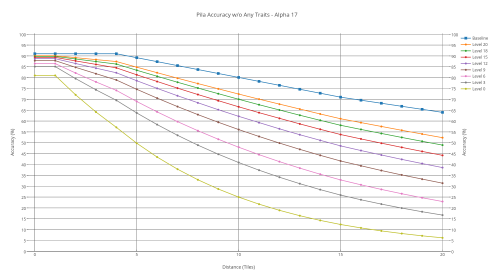 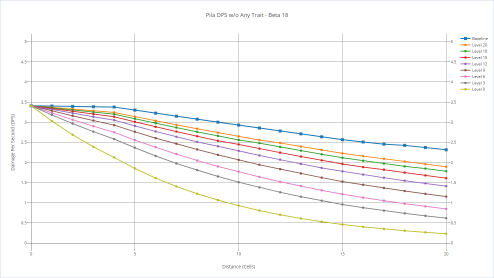 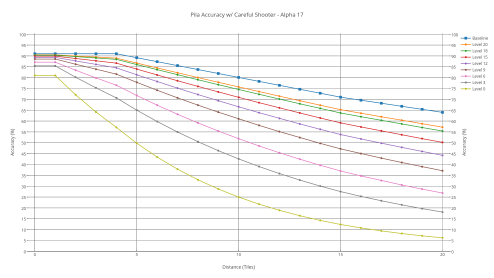 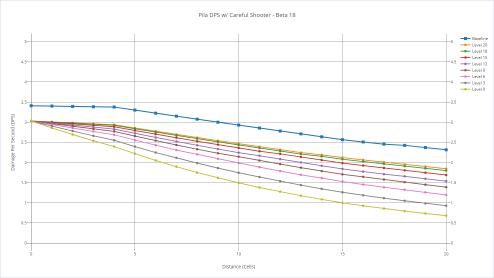 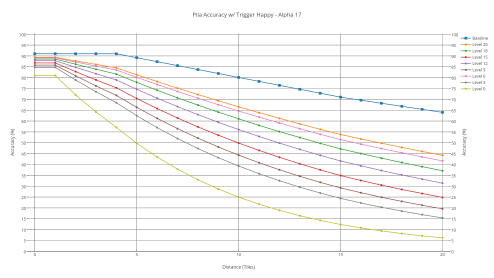 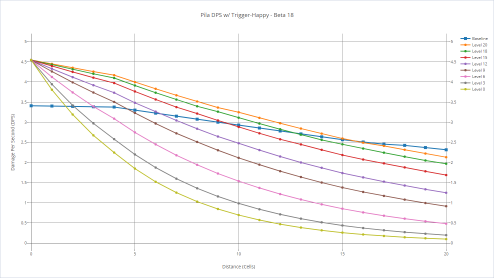