A simple short selfbow made from a single piece of wood.

The short bow is a very light, single-shot ranged weapon in RimWorld which deals a moderate amount of damage per shot; slightly longer time between shots; slightly shorter range and moderate accuracy.

The short bow is a low-tier neolithic weapon, and also the easiest ranged weapon to acquire in the game thanks to its extremely low resource requirement, lack of a requirement for proper facilities and a complete lack of research requirements. With scenarios such as naked brutality, a short bow is essential to earlygame survival as a safe means of hunting and basic defense against hostile wildlife and raiders. Curiously, short bows also have a slightly higher armor penetration rating than the much more powerful greatbow.

However, short bows are also the only neolithic ranged weapons that can't stagger humans, which puts them at a disadvantage against melee units. The short bow also has the 3rd lowest damage output out of all ranged weapons in the game, only beating the pila and incendiary launcher - the latter being a support weapon rather than straight-up aggro. Other weaknesses include low accuracy for a neolithic weapon (especially at medium range), as well as a rather slow projectile velocity. Naturally, a short bow will be significantly overshadowed in terms of combat performance by even the most basic of firearms such as autopistols and revolvers, with two short bows being required to match a single one of the aforementioned firearms.

The short bow is best-suited for close-quarters engagements overall since it's most accurate up to short ranges, and because of its sub-par projectile velocity. It's also a somewhat viable hunting weapon for smaller and lower-risk game.

Against an unarmored human, a short bow can kill with 4 hits to the torso, 3 hits to the head or neck, or 1 hit to the brain; cripple or destroy limbs in 3 hits; and cripple or destroy eyes and digits with a single hit. It'll generally take around 6 hits (~27.8 seconds average) to incapacitate that human from pain shock.

Overall, the short bow is best paired with a careful shooter until level 9, and with a trigger-happy shooter beyond that point.

Short bows can be purchased from neolithic war merchants and orbital combat suppliers, tribal and outlander settlements, or obtained from the following raider kinds:

Short bows can also be manufactured at any smithy or a crafting spot with no research required; from

You also start with two short bows with the lost tribe scenario, along with some pila, a wooden club, a steel ikwa and a jade knife (main article).

This section goes over how well the short bow fares against comparable weapons (similar value, tech level or similar characteristics) in 1 vs. 1 combat.

Results in the tables below are the percentages of battles that short bows either won or tied against the weapon listed in the first column of said tables, with a sample size of 2,000 battles per result. Higher percentages are better.

The graphs assume a normal quality short bow against an adult human that's out in the open in clear weather. For DPS, projectile speed has also been factored into the equation, with the weighting based on the base amount of attacks that it'll take to put the aforementioned target into pain shock. 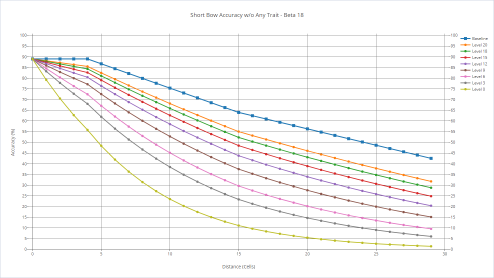 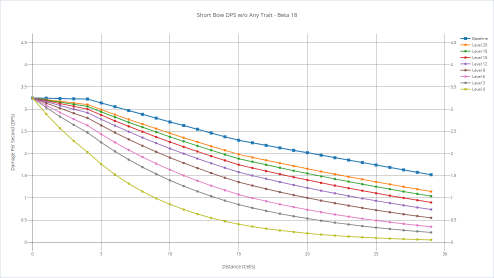 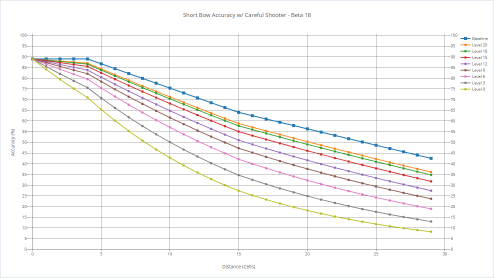 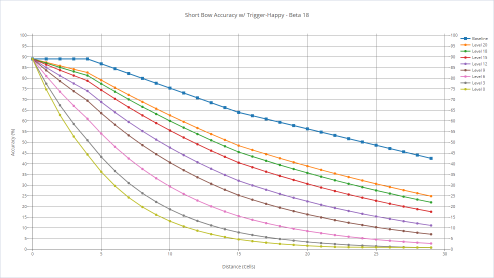 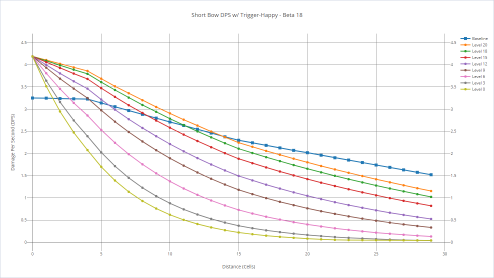