The first beverage besides water ever consumed by mankind. Beer can taste good, but its main effect is intoxication. Excessive consumption can lead to alcohol blackouts and, over time, addiction.

Beer is a beverage product that provides a small amount nutrition and recreation, as well as inebriating the user providing a mix of bonuses and maluses based on how intoxicated the pawn becomes. While not very nutritionally effective, its main use is to improve a colonist's mood to prevent mental breaks. However, overuse may lead to inebriation and possible alcohol addiction. The default drug policy setting is both for addicted and for joy.

One beer provides 0.08 nutrition and 17% recreation. The first beer will give a +10 mood boost for almost 5 hours, but additional beers have varying additional effects, positive and negative (see table below).

It can also be used as a somewhat ineffectual melee weapon, doing less DPS than a club or even a lump of wood, but still more than a normal human fist. Conveniently, the beer is not lost after using it as a weapon.

Beer is produced in three steps, with a recommended related (but optional) fourth:

(* Wort has no quality and cannot give food poisoning, so an untrained "cook" can safely be assigned the job, so long as they have "Cook" enabled in the Work tab. They'll be slower to finish this step, but there will be no difference in the end product.) 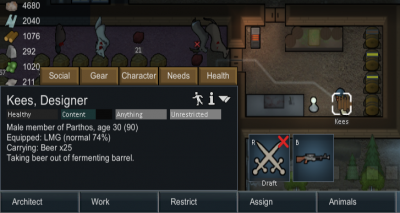 Colonist taking beer out of fermenting barrel, ready for consumption.

After 6 days, you have your beer! It's no longer "alive" so it can be stored anywhere regardless of temperature or indoors/outdoors; it will never rot, unlike most other "food" or drugs.

The process of brewing involves a living organism, so difficulty can increase greatly depending on your biome's weather conditions. Avoiding delays or failure requires following temperature requirements:

Because the "fatal" range is unforgiving even for a moment, it's recommended to keep your temperatures well within the "ideal" range and have a separate, emergency power/temperature system so that an open door or short-term power loss will not cause the loss of the batch. Double-walling your brewery to insulate from extreme temperatures, and/or installing a long* entry hall/room as an "air lock" with doors at each end is not a bad idea. Also, when planning the location of your brewing, be aware that a kitchen will often be quite warm, as active stoves produce excess heat.

(* 6 tiles long gives time for the first door to shut before your colonist opens the next, so that your brewery is not exposed to "outside" temperatures. Autodoors would shorten this required length.)

Don't worry, we'll walk you through it...

So, at that rate, 1 barrel every 7 days will support enough beer production for just over 3.5 pawns (25 beers / 7 days). If you rotated multiple barrels (see next), you'd get enough beer for 1/day for...

It would not be too hard to have everything in place and approach something just over 6 days/run, which, if maintained, would give you a production rate closer to 1 barrel = beer for 4 pawns.

If wort is added to a barrel that is already in the fermentation process, that process gets reset and starts over with the new amount, the full 6 days. Manipulating multiple barrels so they don't suffer this setback requires a small amount of detail work, but nothing too micro-managing. Wort is added from a stockpile to the "nearest" barrel, so multiple barrels require multiple small stockpiles.

Set up your barrels a few tiles apart from each other, and set up a small (3-5 tile) stockpile adjacent to them. Every tile in the stockpile has to be closer to its barrel than to any other barrel. Give each stockpile a separate, distinct name - maybe "barrel no. 1" or "beer north". A single tile of colored carpet could be used for "red beer"/"dark beer" etc - whatever works for you, just so you know which stockpile is with which barrel.

When ordering wort to be made, try to do it in batches of 5; 1 batch is 5 wort, each barrel holds 25 wort max, 5 batches is a full barrel. When setting the Bill, go into Details and specify which stockpile these 25 wort will be taken to. You can have multiple Bills up at once, even if they are all for "5 wort". Just make sure each one points to a different stockpile.

If the wort-making process is broken into different amounts, manually ordering the wort to be "merged" into a stack of 25 may help. Then wait, or order that to be hauled - and a new, full barrel is started.

Consuming beer raises a colonist's alcohol level by 15% per beer. Alcohol level, not displayed precisely in-game, determines inebriation level and falls automatically over time at a rate of 75% per day. Once a colonist becomes drunk the game records it so it may be used later in an art description.

Once a colonist develops Alcohol addiction, a new bar called "Alcohol" will appear in their "Needs" tab. The colonist will consume beer when the bar is low enough. Abstinence will cause the colonist to enter a withdrawal period that adds a negative thought with a -35 mood penalty which is necessary if intending to cure the addiction. Recovery can be monitored by checking the "Health" tab. Once withdrawal reaches 100%, the character will lose the addiction. It will take about 40 days to recover from an alchohol addiction, during which the colonist will have violent and frequent mental breaks.

Once a colonist reaches a drunk state, they will go through the hangover stages after their inebriation wears off. If a colonist drinks beer while hungover they will be both hungover and inebriated. Severity starts at 100% and decreases consistently to 0% over the course of a full day, however it isn't visible until after the alcohol effect is gone.

Chemical damage can occur in the brain while unconscious in a mean time of 10 days' spent blacked out, which reduces consciousness to 50%, significantly reducing performance. There is no way to perform brain surgery.

In real life, beer is brewed from malted barley/wheat, not hops. Hops are used in the brewing of beer to provide flavor and as a preservative.

Also unlike its RimWorld counterpart, real beer is typically not flammable as it does not have sufficient alcohol content. In fact, a bottle of beer being placed in a fire would be more likely to extinguish it when the bottle broke.

This, along with wood, is one of only two items that serves dual purposes as both a usable item and an improvised weapons.