A recurve bow. Its construction behaves like a tuned spring, storing energy more efficiently and delivering a faster shot.

The recurve bow is a light, single-shot ranged neolithic weapon which deals a slightly higher amount of damage per shot than a short bow, has a moderate time between shots, slightly better range and slightly higher overall accuracy.

Recurve bows can also be manufactured at any smithy or crafting spot once the Recurve Bow research has been completed;

40 Wood and 5,000 ticks (1.39 mins) of work. Do note that you start with the required research project already completed with the lost tribe scenario. A crafting skill of at least 5 is required.

Recurve bows can be purchased from neolithic war merchants and orbital combat suppliers, tribal and outlander settlements, or obtained from the following raider kinds:

The recurve bow has the highest armor penetration out of all neolithic-tier ranged weapons, even being somewhat higher than the greatbow's. Projectile velocity is also good, roughly matching that of pistols and shotguns; arrows fired from a recurve bow stab instead of cut due to this, which results in heavier bleeding which is comparable to a greatbow's projectile. Range is also good for a neolithic weapon, as well as overall accuracy and a stopping power that's high enough to stagger humans. Recurve bows are also somewhat easy to acquire due to their low technology requirement and resource costs, as well as the cheapest weapons that can stagger humans.

Despite being good for a neolithic weapon though, caution is still advisable when engaging enemies with basic firearms such as autopistols and revolvers. Medium-distance accuracy is good enough that the recurve bow's DPS towards 25 cells is actually comparable to that of the revolver's, though the latter will still handily beat this weapon if much closer than that distance.

Since the recurve bow's accuracy is somewhat consistent overall and projectile velocity is good, it's somewhat of a jack-of-all-trades and is thus usable with effect at all distances within its range. Regarding combat roles, the recurve bow can do well as both a damage-dealing weapon as well as a support weapon. This weapon's also good for hunting due to its respectable per-shot damage as well as range.

Against an unarmored human, a recurve bow can kill with 3 hits to the torso, 2-3 hits to the head, 2 hits to the neck, or 1 hit to the brain; cripple limbs in 2 hits; and cripple or destroy eyes and digits with a single hit. It'll generally take around 5 hits (~21.5 seconds average) to incapacitate that human from pain shock.

Overall, the recurve bow is best paired with a careful shooter up to level 11, and with a trigger-happy shooter beyond that point.

It's advisable to replace all short bows that your colony may have with recurve bows if possible since recurve bows are a significant overall upgrade while only being slightly more expensive. The recurve bow could also typically be supplanted by greatbows. However bows in general are rapidly outclassed by even early guns of the same quality. Even Tribal starts will quickly loot firearms to replace them, making researching it largely a waste of time. Should you find or craft a particularly high quality bow it might remain competitive in the early game.

The graphs assume a normal quality recurve bow against an adult human that's out in the open in clear weather. For DPS, projectile speed has also been factored into the equation, with the weighting based on the base amount of attacks that it'll take to put the aforementioned target into pain shock. 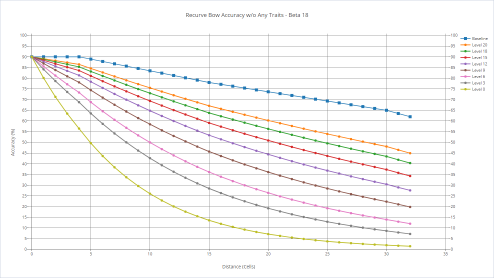 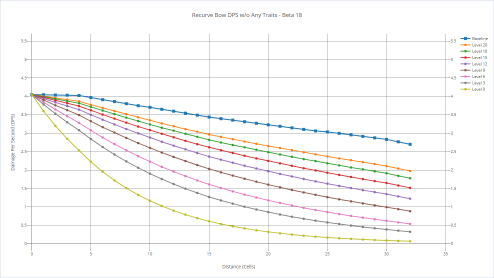 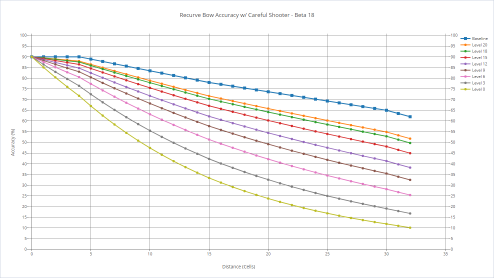 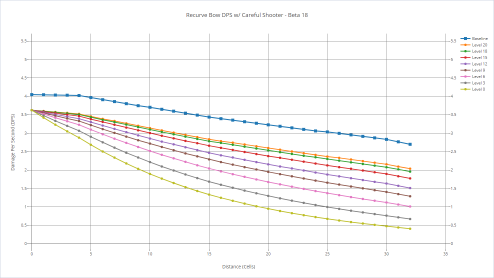 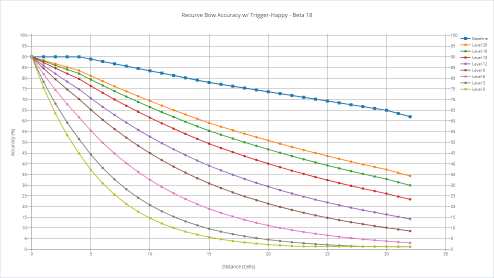 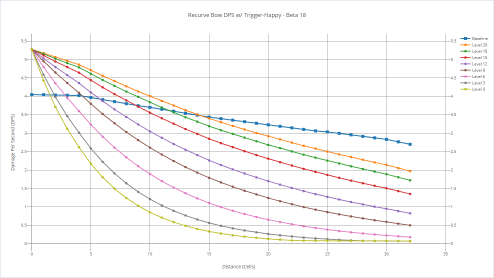