animals, furniture, gear, resources, food, drugs, works of art, and much more, running almost the entire spectrum of items in RimWorld, depending on the exact trader, what they have in stock to offer and what they are interested in buying from you.

To initiate a trade, a colonist simply contacts the lead trader. With visiting caravans, this pawn is signified by a yellow question mark "?" above them; select your trader, right-click the visiting trader, and select "Trade", and the selected pawn will march out to meet with the trader. For Orbital traders, who are not physically present on any map (see below), similarly, but right click the comms console and select the party you wish to trade with. When the two come together on the map (your colonist and trader or your colonist and comms console), a Trade menu will pop up. You can make a (partial) trade then, or not, or close this menu and continue with the game, then repeat the process later, as you wish.

Note that colonists that have "Social" disabled (due to backstories) cannot initiate trade nor activate a comms console.

Actual trade prices are determined by Trade Price Improvement, a stat based off the Social skill of the colonist actually doing the trading. Trade Price Improvement is influenced by your trader's ability to speak and hear. Damage to any such parts will hurt your trade prices, and you may wish to consider selecting, training, or otherwise acquiring a different designated trader.

The trade interface shows what commodities are available to trade - the trader's stock, your colony's current available stock, and the prices to buy and sell.

Caravans consist of one or more faction members often with pack animals and/or tamed animals in tow. Players can either form their own caravan or wait for others to visit their own colony. To trade with a foreign passing caravan, direct a colonist (preferably with high social skill and thus Trade Price Improvement) to speak with the caravan member who has a yellow question mark above the head. Stored items will be eligible to sell and appear in the trade window. Purchased items will be dropped in the location where the trader was standing and will need to be hauled.

Sometimes, foreign caravan members may fight each other and accidentally drop items from their gear inventory.

After researching the Microelectronics project, a comms console and an orbital trade beacon can be built, which allow:

To trade, order a colonist to interact with the comms console. Only items located within range of an orbital trade beacon can be traded. Purchases will be sent via drop pods to a beacon's open-air tiles, drop pods will phase through constructed roofs otherwise. If all beacon tiles are covered, drop pods will land at the nearest eligible tile. Colonists using the comms console use the same Trade Price Improvement stat as when making trades in person. Prisoners can be sold directly from their cell even if not in range of a beacon and tamed animals can be sold from anywhere on the map. The trade value of a prisoner or animal is based on their capabilities, injuries and skills.

Trade prices are based on the market value. In general the selling price is significantly lower than the buying price. This is however dependent on several modifiers that can be seen in the tooltip when hovering over an item's price in the trading dialog.

First of all goods from the colony are sold at 60% market value, and bought at 140% market value. These are further affected by the both the storyteller's economic and difficulty settings.

Some traders will charge 2x the price for the certain good, in addition to the multiplier on buying. Selling remains at normal price.

This multiplier is affected by the stats of the chosen colonist. This is listed on the tooltip as "Your negotiator bonus: -x%". Additionally factions offer a 2% discount when trading at a base.

The selling prices of the following item types are affected by this multiplier. Note that this doesn't affect the buying price.

The multipliers make it more difficult to farm raids for profit, because weapons dropped by dead enemies are not valuable in trade. It also means that crafting weapons in your colony only makes sense for personal use, and not for selling. The game encourages creating art for sale, as it is more profitable than all other items. 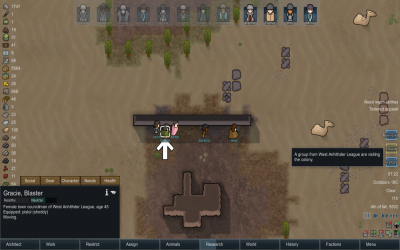 Visitors but not traders, no character with (?) sign overhead.

Note that different merchants tend to only accept items of the general category that they offer - so don't necessarily expect to trade your wooden sculptures for firearms, nor your piles of smokeleaf for televisions, nor your herbal medicine for venison, nor your valuable chinchilla furs for slaves, depending on exactly what type of trader is offering them. This is not true if you travel to a village site to trade, as then there is no "filter" as to what is offered or accepted beyond the general tech-level of that tribe.

Most* all traders do accept silver, components, and packaged survival meals*, and many will accept pack animals*.

Bulk goods traders deal in food and basic materials, such as steel, (No Longer) wood, components, gold, and textiles, as well as clothing, furniture and domestic animals.

Exotic goods traders deal in rare and valuable items such as artifacts, televisions, telescopes, apparel, bionic body parts, advanced components, drugs, skilltrainers, some furniture, plasteel, gold, uranium, glitterworld medicine, and "psychic" weapons, among others. They may also offer pack animals and animals of the wilder variety, or those not native to the local biome. They do not accept raw plant material, not even drug precursors.

The tribal variant of the exotic goods trader, the shaman merchant deals in lower tech versions of the same, including smokeleaf. He also may offer high-tech medicines and "psychic" weapons.

Slavers deal in slaves/prisoners, weapons, body parts, medicine, and drugs. The chance of traders carrying prisoners should go down as colony population goes up. A healthy slave (yours or theirs) has a value of around 1,000 silver or maybe a little more, less if they are suffering from a permanent injury, and a lot less (down toward 100 silver) if they are currently badly injured, even if they are healing up. Damaged goods are damaged goods, apparently.

(The outlander variant of this trader was previously called a "pirate merchant" and they are still referred to as such in both discussion and the game code. Note that despite the name, outlander factions, not pirate factions, send "pirate merchants".)

Faction bases have an extensive inventory and deal with most things. They take 30 days to restock. The remaining time can be checked in "Show what will buy".

Trade caravans have a moderate amount of items to buy and silver to trade with.

In order to trade with an Orbital trader, you first must be able to make contact with them. This requires 3 things:

If you have the first two, you will be automatically notified when the third appears. The trader leaves in 16 hours, or 40,000 ticks (11.11 mins), after arrival.

Orbital traders usually come with large stocks corresponding to their trader type. You cannot "request" a specific type of orbital trader the way you can when contacting allies.

Trade caravans that come to your colony usually pick a random spot outdoors where they will simply wander around and wait for your colonists to send a negotiator for trade. This spot may be in a ridiculous place, such as the middle of a river. When hungry visitors may use the colony's tables and chairs for dining.

A trade caravan will usually leave as soon as the merchant pawn becomes tired (the first notch on their sleep need), though they can still be traded with while walking towards the edge of the map. If the merchant has a different sleep need than other members of the caravan for some reason, caravan members may end up sleeping on the floor when exhausted.

Sometimes, foreigners will leave your map before you have the chance to interact with them. They may start social fights amongst themselves, fight rival factions, or get attacked by wild animals. The caravan may also leave the map on their own if the temperature becomes too high or too low for them or their animals, similar to raiders. Foreigners who get downed can be rescued, either by their own members or by yourself for a goodwill bonus. Any items dropped can be unforbidden without damaging relations, however stripping clothes from anyone unconscious causes a loss of goodwill.

Sell if you have enough cloth