From RimWorld Wiki
Jump to navigation Jump to search
This page is for the centipede weapon weapon, for the identically named turret weapon, see: Inferno cannon (Turret)

An incendiary-shot mini-artillery device. It fires a large incendiary warhead.

The Inferno Cannon is a medium-range siege weapon armed to centipedes only, and it won't drop upon its death. It is equippable, but cannot be acquired outside of dev mode. It fires a projectile that sets anything within a 2.4-tile radius on fire, accuracy for touch range is 79, short is 42, medium is 18, and long is 6. While its shots deal trivial damage, the primary threat is that it starts fires that can consume large areas and cause extensive damage if left uncontrolled. Characters caught by its fire will run out of their cover in an attempt to put themselves out and will not fight back when damaged, making them sitting ducks. Burns do not cause bleeding but instead cause extensive pain, which leads to shock and incapacitation, or uncommonly scar the pawn badly. Downed colonists are also liable to death by fire unless rescued or put out. Shots can burn flammables through walls, so use extreme caution when opening ancient shrines as you may not want to trigger the spacers while the threat still lingers around. Like all unobtainable weapons, after being equipped and dropped, it disappears. 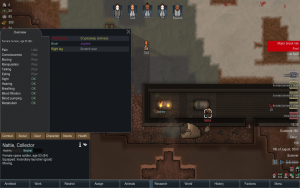 If you haven't already switched from wood walls and floors, Inferno Cannons are a significant threat. To avoid the worst of the collateral fire damage, build bunkers made of stone to fight Centipedes from, and keep firefoam poppers handy just in case fire threatens your stockpiles or farm fields.

Devilstrand clothing, especially dusters, offers a lot of protection against fire damage. Consider investing in some if you can.

Note that while the other qualities are defined by the game code and can be spawned in with dev mode, only certain[Which] quality inferno cannon will ever spawn in-game naturally.