A portable automatic turret. Requires steel to refurbish its barrel after heavy use. May explode when damaged. Its dumb AI brain can't be directly controlled, so beware of friendly fire.

The mini-turret is a stationary defense mechanism which automatically fires at any enemies entering its range of 24.9 tiles. It fires a 2-round burst with no need for warmup, has a slow 4.8 second cooldown and 96% per-tile accuracy. Mini-turrets are somewhat underwhelming on their own, and need to be placed in large numbers to be effective.

After firing 60 rounds it requires a barrel change to be performed by a hauler, costing:

Constructing the turret requires Gun Turrets to be researched. Note that some scenarios start with it already researched.

Alternatively, it can be opportunistically uninstalled and looted from various world sites.

Used alone or in small numbers, mini-turrets do not provide much additional firepower. However, raiders will often target the turret instead of the colonists if it is closer to them, shielding the colonists from harm until the turret is destroyed. However, attackers will not take an unpowered turret as a primary target. The firepower of the turrets adds up when massed together, to the point where turrets alone can sometimes beat back even massive raids. Larger colonies often build a "killbox": An entrance area designed to funnel raiders where turrets can do maximum damage while the raiders' own ability to fight back is minimized. Raiders with long ranged weapons can snipe mini-turrets from outside its range, so forcing them into close range with walls or terrain is recommended.

The accuracies listed in the infobox are for the base weapon, the Mini-turret gun - similar to weapons used by pawns both the weapon's accuracy and the pawn's Shooting Accuracy combine to make the true accuracy. In this instance, the Mini-Turret has a Shooting Accuracy of 96%, equivalent to a pawn with a shooting skill of 8.

As of version 1.3.3117, despite displaying in the mouse-over box as benefiting from cover, empirical testing demonstrates that this is false and mini-turrets do not benefit from cover at all.[1] 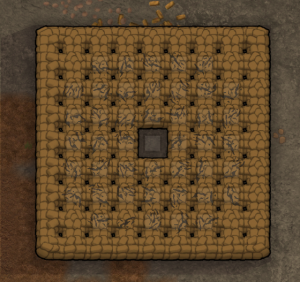 Turrets have a 50% chance to explode when it reaches 20% health. The exploding turret will spark and emit a hissing sound shortly before exploding a 240 ticks (4 secs) later. All nearby raiders will run in an attempt to get out of the blast radius (3 tiles) to keep their skin intact.

The explosion deals 50 Bomb damage - which does 400 damage to walls, 200 to plants and impassible buildings, 100 damage to all others structures and furniture, 50 damage to the slag chunks and components that drop, and around 50 damage across multiple body parts to all pawns unlucky enough to get caught in the explosion. Due to this, it's best to space out groups of turrets so that one exploding doesn't create a chain reaction. This is somewhat less of a risk with Plasteel turrets. Doors do not block the explosion.