"A magazine-fed fully automatic shotgun. It is even shorter-ranged than a typical shotgun, but is extraordinarily dangerous due to burst fire."

Chain shotguns can also be crafted at a machining table once the Gas Operation research has been completed; from

Chain shotguns can be purchased from outlander and orbital combat suppliers, outlaner settlements, or obtained from the following raider kinds:

Compared to the pump shotgun, the chain shotgun trades range and accuracy for the ability to fire in 3-shot bursts rather than being single-shot.

Similarly to the pump shotgun, the chain shotgun has a respectable per-shot damage as well as exceptionally high stopping power, being able to stagger all pawn kinds in the game except for elephants, thrumbos and megasloths. However, the chain shotgun also combines the aforementioned traits with a deadly 3-shot burst which results in a significantly higher overall rate of fire than the pump shotgun; a single burst can occasionally deal enough damage to incapacitate a perfectly healthy human from pain shock if internals are also struck.

Raw damage output is exceptional as a result, only being surpassed by the minigun and the single-use triple rocket launcher. Although accuracy is rather poor, this actually allows the chain shotgun to do some crowd controlling due to its rate of fire. Despite the aforementioned accuracy, the chain shotgun's single-target damage output is also the highest out of all ranged weapons in the game (excluding the single-use rocket launchers); only the heavy SMG, charge rifle and minigun come somewhat close in this area.

However, the chain shotgun's range is the shortest in its class, being tied with grenades and molotovs. Additionally, the chain shotgun is heavier than most other ranged weapons, being high enough to have a slight impact on a colonist's overall carrying capacity.

Regarding use-cases, the chain shotgun is best suited as a close-quarters offensive weapon, but is also an excellent supporting weapon against infestations due to its stopping power, damage output (especially against megaspiders) and ability to crowd control. This weapon's also unsurprisingly a poor choice for field combat due to its range, and is definitely not advisable to use as a hunting weapon since quarry will be significantly more likely to turn manhunter within the chain shotgun's range.

Against an unarmored human, a chain shotgun can kill with 3 hits to the torso, 2 hits to the head or neck, or 1 hit to the brain; cripple or destroy limbs in 2 hits; and destroy eyes and digits with a single hit. It'll generally take around 4 hits (~6.4 seconds average) to incapacitate that human from pain shock.

Overall, the chain shotgun is best paired with a careful shooter up to level 6, then with a trigger-happy shooter beyond that point.

This section goes over how well the chain shotgun fares against comparable weapons (similar value, tech level or similar characteristics) in 1 vs. 1 combat.

Results in the tables below are the percentages of battles that chain shotguns either won or tied against the weapon listed in the first column of said tables, with a sample size of 2,000 battles per result. Higher percentages are better.

The graphs assume a normal quality chain shotgun against an adult human that's out in the open in clear weather. For DPS, projectile speed has also been factored into the equation, with the weighting based on the base amount of attacks that it'll take to put the aforementioned target into pain shock. 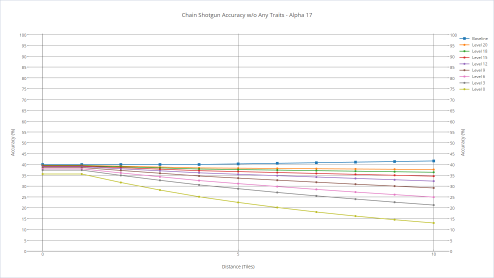 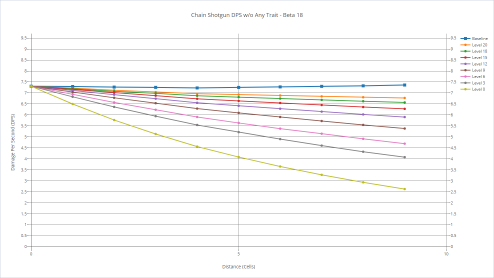 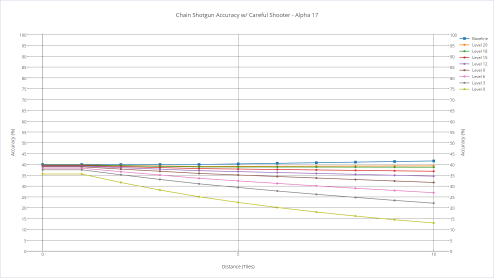 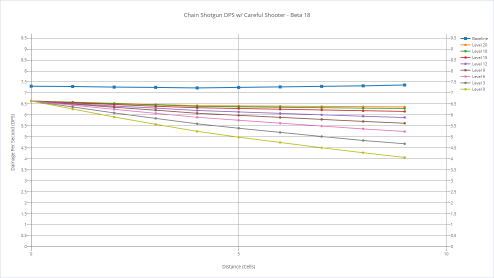 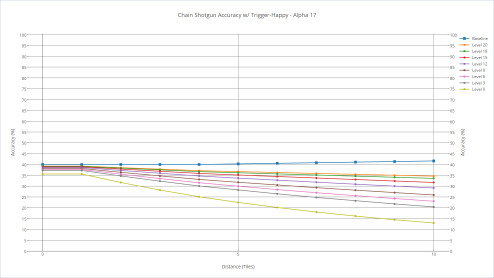 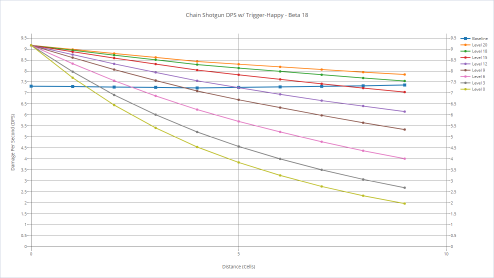