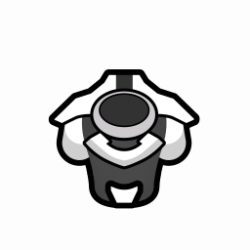 A variant of recon armor with an integrated burst rocket for short-ranged flight. Locust armor is slightly less protective than standard recon armor. Each jump consumes a burst of fuel, so the armor must be reloaded after several uses.
Unlike most ultratech military units, locusts train primarily with melee weapons. They usually avoid static shootouts, preferring to jump straight into enemy fortifications and fight hand-to-hand. They do poorly in static defense or confined quarters, but excel in mixed cover or shipcracking operations.

Locust armor is a set of armor added by Royalty DLC that allows its user to make rapid rocket powered jumps to a tile within range and in line of sight while also protecting from attacks. It is a variant of Recon armor and forms a full set with the Recon helmet

Locust armor can be crafted at a Fabrication bench once the Jump Packs and Recon Armor research projects have been completed. Each set requires

Alternatively, the armor can be received as a quest reward or purchased from traders.[Which?]

While less protective than recon armor, locust armor contains an integrated burst rocket that, similar to the jump pack, allows the user to make up to 5 jumps before needing to be refueled. Refueling costs

20 chemfuel per charge and is performed by select the armor's wearer and right-clicking a pile of chemfuel. The user can jump anywhere within line of sight, so they can jump over rock chunks but not Walls. There is a short 30 ticks (0.5 secs) warm-up before jumping. A pawn cannot be injured mid-jump, even by explosions right under them, but can still get hit during a short warm-up before jumping.

Pawns will never automatically use the rocket - instead it must be manually activated by the player by use of the "Jump" gizmo, similar to using Utility items. This gizmo will only appear when the pawn is drafted. NPCs will never use the jump capability at all.

Unlike the jump pack it does not occupy the utility slot, and so can be worn with all other utility items such as the shield belt.

It is currently unknown if lower quality packs are actually faster than other methods of increase movement rates, such as Archotech legs, however the i-frames offered by jumping offer an advantage to offset any speed delays.

The distance the user can jump is dependent on the quality of the armor. Note that it has the same range as a Jump pack of the same quality.

The locust armor is less protective than recon armor. The downside of locust armor is its atrociously low sharp armor, standing at only 87% on a normal quality armor, beaten by the flak vest by a handy amount (13%), although flak vests only cover the torso. Compared to dusters, however, it is 1.5x more protective than a thrumbofur duster, and more than 8x more protective than a simple cloth duster. The most protective and relatively common duster variant (assuming you are in the temperate forest biome) is the rhinoceros leather duster, being half as protective as locust armor. Your decision of whether or not to choose the locust armor over a flak vest/duster combo depends on what is more important to you and what textiles are available: the arms of your pawn, which can be replaced with bionic arms late game but renders a pawn almost useless in the early game, or the torso, which is irreplaceable and kills your pawn instantly if destroyed, but has more hit points?

That it be combined with utility items makes it an effective way to get melee users into the fight. Or to deploy a strategically placed low-shield pack or orbital bombardment targeter. It can also serve for shooters to get out of harms way, as one jump covers a large range fast.