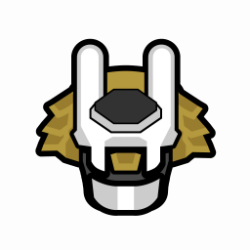 A suit of heavy powered armor, built for maximum protection at the cost of mobility. Heavy layered plasteel-weave plates with solid ablative coatings stop all but the most well-aimed or powerful attacks. Neuro-memetic assistors prevent the suit's massive weight from immobilizing the wearer entirely, but the suit is still quite cumbersome.
Expensive and beautiful, prestige armor like this is usually made for those of high status. Embedded eltex threads also enhance the wearer's psychic sensitivity.

Prestige recon armor is a set of power armor introduced by the Royalty DLC that forms a full set along with the Prestige cataphract helmet. It combines the defensive ability of Cataphract armor with additional the psychic boosts of Eltex apparel.

Alternatively, the armor can be received as a quest reward, purchased from traders, or found on Stellic Guards.

Prestige cataphract armor improves a pawns Psychic Sensitivity by 5%, and improves the pawn's base neural heat recovery rate by 0.033 heat per second, though this will be modified by their psylink level. This primarily improves a pawns psychic power, but note that it also makes them more susceptible to psycasts themselves, as well as psychic drones. This increase is inferior to the Eltex vest that the prestige cataphract armor replaces, but in exchange it is significantly more protective.

Acquiring it through fighting the Empire is also difficult due to their ubiquitious Death acidifier implants and the general difficulty of killing the pawns wearing this armor and carrying the empires best weapons. The armor provides a significant Move Speed debuff of -0.80 c\s, double that of Marine armor and over six times that of a flak vest, making the armor impractical for every day wear by some pawns. The bionic legs may be used to offset this move speed penalty.

Cataphract armor also appeases the middle and outer torso requirements of all nobles, replacing both the Formal vest/Corset and the Prestige robe.

Every set found on a Stellic Guard, be it Warden or Defender, will be red and of Excellent quality.