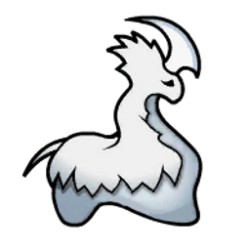 A gigantic, graceful creature of unknown origin. The thrumbo is gentle by nature, but extremely dangerous when enraged. While its long fur is exceptionally beautiful, its hide is also incredibly resistant to damage. Its razor-sharp horn fetches a huge price.
Legends say that an old thrumbo is the wisest creature in the universe - it simply chooses not to speak.

Thrumbos are large, powerful animals not native to any biome, instead appearing in all biomes through a random event.

Thrumbos are both herbivorous, eating both plants and harvested vegetables, and dendrovorous, eating live trees. Note that unlike the other dendrovore, the alphabeaver, thrumbos will not eat anima

Thrumbos are difficult, but rewarding, to kill. They are are extremely powerful and a rampaging one can threaten the entire colony. Take precaution when attempting to hunt them. They can move faster than a colonist and their horn inflicts massive damage. Never, ever engage them except on favorable terms.

However, should you kill one, the rewards are significant. They yield the most meat of any animal when butchered, tied only with Elephants and Megasloths. The horn is both valuable, worth 800 silver, and a fairly powerful melee weapon equivalent to an excellent steel longsword. Note however that Juvenile thrumbos will not drop horns. Their fur is itself valuable to sell, but also makes some of the most valuable and highly protective clothing in the game - a Thrumbofur duster is worth over a thousand silver, is almost as protective against sharp damage as a steel plate armor and can be worn with a flak vest.

An incapacitated thrumbo is an excellent opportunity to train healing skills as they can sustain dozens of treatable wounds and still survive. There is also a small chance the doctor may bond with the animal, netting you a free pet thrumbo.

Thrumbos' 98% wildness makes them one of the hardest animals to tame, as even at level 20 you may only have a 1% chance to tame it. Previously, the best method of training a thrumbo was capturing a wounded one and healing it, as your doctor has a 0.4% chance of bonding with the animal per wound treated and there was significant risk to being in melee range of a now-manhunter thrumbo. However, with the elimination of their manhunter on tame chance, there is now little risk in taming besides wasting food and the handlers time. Note, however, that 9 hours must elapse between taming attempts. Ideally, a taming inspiration would be used, assuming the inspired pawn has sufficient skill to attempt it.

Successfully tamed thrumbos are of little everyday use to a colony when compared to ordinary dogs, sporting a voracious appetite and a high resistance to training. Their high wildness means keeping them trained and tamed will require an inordinate amount of handler time. Carry mechanics do not allow the thrumbo to carry multiple stacks of items despite its strength.

Still, thrumbos have significant utility in combat. Being extremely tanky melee fighters, they can be used as a last line of defense against an infestation or mechanoid drop. Additionally, Doomsday rocket launchers are highly dangerous in the late-game, capable of one shooting colonists from a long range. With thrumbos, however, one can release them and let them tank these rockets. A thrumbo can tank 5-6 volleys without being downed due to their high hit points, making the raiders exhaust their rockets for some easily treated wounds. Thrumbos usually manage to charge into groups of raiders, which can even cause the raiders to use their rockets in friendly fire, single-handedly dispatching raids while your colonists remain completely safe themselves.

Although extremely difficult to achieve, taming one thrumbo of each sex will allow the colony to breed yet more thrumbos, resulting in a potentially inexhaustible source of their valuable fur and horns. However their long gestation period makes this more time intensive than other animals. Also keep in mind that keeping them tame to build a sufficient breeding herd will likely totally monopolize your handlers' time.

Thrumbos are slaughtered in one hit like any other tame animal, so killing them this way is not dangerous at all.

This animal can be trained as follows:

*As of version 1.1.2610, all animals can be tamed. The percentage of likelihood of success depends on factors such as the Animals Wildness Percentage, Pawn Handling Skill, and others. More information can be found on the animals page.