A work station with all the equipment needed to mix wort for beer production. Wort must be fermented to finally become beer.

The brewery is a production bench used by cooks to produce wort, a precursor to beer.

Breweries can be constructed once the Beer brewing research project has been completed. They require

The brewery is the second stage on the path to creating beer. After harvesting hops, pawns with the Cook work type enabled will take 25 hops to the brewery and make 5 wort. Wort will then be brought by haulers to a fermenting barrel where they will ferment and turn into beer.

Breweries are similar to stoves in that you add bills to the brewery, but the only option is "Make wort". Production speed is determined by the pawn's Drug Cooking Speed, itself largely controlled by their Cooking skill. Brewing has no quality, so skill level has no other effect than speed.

Breweries have no other function other than making wort for producing beer.

Hops have a comparatively long rot time of 30 days, and thus can easily be stored in stockpiles near to the brewery, rather than in a nearby fridge. This allows your cooks to spend more time at the brewery and less time walking to and from the stockpile.

For further efficiency, shelves can be used directly adjacent to the brewery's interaction spot to eliminate moving all together, so long as the shelves can be kept stocked by haulers. For more information, see the Shelf Analysis section. 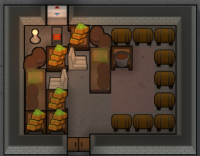