A fueling port for launching one transport pod. Pod launchers can launch as a group - but the launchers must be placed adjacent to each other.

The pod launcher deploys a singular transport pod elsewhere in the world.

Pod launchers can be constructed once the Transport pod research project has been completed. They require

chemfuel in order to launch. Each tile of distance requires 2.25 chemfuel (rounded down). Launchers can send pods up to 66 tiles away, which requires 150 chemfuel to do so. Extra fuel remains in the pod for future use. If you deconstruct the launcher, any remaining fuel will be dropped in item form, thought the normal loss of the required resources will occur.

Pods can be launched at an empty tile to start a caravan, at a caravan itself to add to it, or at a faction base, colony, or event space. Manned pods dropping at an unloaded faction base can choose to drop at the edge or center. When dropping into a loaded map, such as a player-controlled colony (including its own tile), players can choose the pods' exact drop point. Be careful with the landing site, as the pods can go through constructed roof. While they don't deal any damage directly, the collapsing roof can damage nearby items.

disposed of this way will cause pollution on the given tile, annoying nearby factions.

Launchers can be grouped, allowing you to fire multiple transport pods at the same time. They have to be "adjacent", sharing 1 tile of length of a common border. Touching corner-to-corner or via a Transport Pod touching both launchers will not work. In effect, grouped launchers can only be places in a row lengthwise or in a "spooning L" formation (where the foot of the L is the Pod).

Grouped launchers will purposefully avoid their pod's individual storage capacity. This can avoid wasting capacity when loading multiple, heavy objects (like colonists), or allow you to launch objects that are too heavy for 1 pod (like an elephant). Otherwise, grouping launchers is mostly for convenience.

Transport pods can be invaluable for creating allies, despite their cost (

1 Component for each pod, plus chemfuel and the launcher itself). Depending on the terrain and season, it could take many days just to get to a faction base, during which colonists are not working and are vulnerable to ambush. The cost is often worth it for midgame colonies, and is minimal for those that can deep drill steel and have Fabrication.

Due to the game's inefficiency in loading large stocks, it's best to create a stockpile right next to the pods and haul all desired items there before loading the pods, to reduce time spent going back and forth. Once inside the pods, pawns will keep their needs, meaning if you load them hungry or exhausted, they will be hungry and exhausted upon arrival. 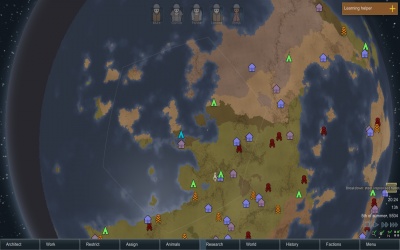 Maximum range of a launcher.