Guest are a friendly or neutral Human which is downed and rescued in an event or injury.

In order to rescue a downed human, you need to have a vacant Sleeping spot, bedroll, bed or hospital bed. Once your pawns reached the downed person and taking back to the vacant sleeping place, he/she will be identify as guest.

If you select the option "Try to arrest", the target will instead be arrested as a prisoner.

Keep an eye on the health condition of the downed person. Sometimes they are hurt seriously and very close to death. It's better to build a sleeping spot beside the downed person and treat the wound first, or the person will be a corpse before arrival at base.

A transport pod crashes nearby, ejecting its incapacitated occupant. If they belong to a friendly faction or a neutral refugee, you can rescue and treat them as a guest, or capture them as a prisoner. People crashlanding from hostile factions can only be captured and cannot be treated as guests.

Unaffiliated transport pod crash victims, or those from friendly factions, may choose to join your colony. They will do so as soon as they regain consciousness. If their status changes to Injured (instead of Unconscious, Incapacitated or Pain Shock) and they do not join you, they are not going to do so voluntarily.

The guest will use any bed assigned for medical purposes. After they are fully healthy, the character will stand up on their own start to walk towards the edge of the map. If they are healthy enough to walk, you can force them to leave earlier. Make sure none of your other beds are set to Medical, then uninstall or deconstruct the sleeping spot or bed they are using.

In order to guarantee that the occupant joins (in the long term), they can be captured and then recruited; note that capturing people belonging to factions will anger them. Releasing a member of most factions and allowing them to leave the map will improve your relations with that faction. The exception is the pirate faction, which will always be hostile. 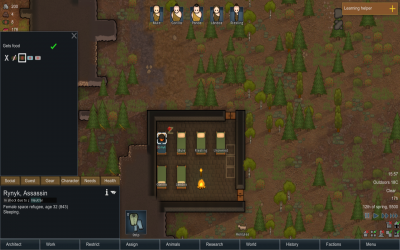 Visitors may collapse due to environmental events such as a heatwave, opening the opportunity to treat them as well. Stripping a visitor doesn't have a negative impact on faction relations. Once the guest recovers, they will start moving towards a map edge to return home. A message will pop-up saying: "Because (name) exited the map healthy, relations with (faction) have improved by 12."".