Humanoids, animals, and mechanoids sustain injuries from sources including melee weapons, weapons fire, explosions, ceiling collapses, and fire. Each source of damage comes with a specific Damage Type. Colonists, visitors, and prisoners can be operated upon and may suffer an injury from a surgical mistake. Each kind of injury has a value of pain, a description for its scar, and flavor text for being mended by medicine. A colonist in shock from extreme pain or incapacitated due to loss of movement becomes ' downed'. Doctors will automatically rescue downed colonists.

Different weapons cause different types of injuries. For example, a mace will crush, a longsword will cut, and fire will burn. The type of injury impacts the amount of pain it causes, the rate of bleeding, and the chance it gets infected.

Injuries cause pain to a pawn, and excessive pain can cause a pawn to be downed from pain shock. Enemies have a chance to die instantly after being downed from pain, which can be adjusted in the difficulty settings. This can be particularly annoying when trying to capture a specific pawn for recruitment. Downing from other sources such as hypothermia, heatstroke, or toxic buildup do not kill instantly.

Most pawns go into pain shock once their pain exceeds 80% except for wimps who are downed at 20% pain. Certain drugs such as go-juice and smokeleaf inhibit pain, and the painstopper implant removes it altogether. This does not come without a downside, however. Pain has a purpose. It tells the body when it is injured, and without pain or player intervention, pawns will continue to fight until they either win, die or, less likely, recieve a crippling injury to the legs, pelvis or spine.

Every 600 ticks (10 secs), heal rate × 0.01 points of damage are healed from a randomly selected (non-permanent) wound. This is equivalent to healing heal rate points of damage per in-game day (60,000 ticks), or healing an average of 1 point of damage every 60,000 / heal rate ticks. The exact heal rate is determined by adding up three factors:

To put this in perspective, consider a colonist who has taken 20hp of damage to various body parts, given different recovery scenarios:

Medicine does not directly cause healing. Instead, it affects the average tend quality, which is also affected by the bed (or surface) the pawn is resting in and the skill and physical capacities of the doctor. Each type of medicine (herbal, industrial, and glitterworld) has a medical potency value, which is a direct multiplier on the average treatment quality, ranging from 0.3 for no medicine at all to 1.6 for Glitterworld Medicine. As the treatment quality is one element of the healing equation, it does impact the healing process, but only partially. For example, a colonist resting in a hospital bed with one wound tended at 0% and another at 100% will have a heal rate for the first wound of 26 and for the second wound of 34, which results in only a 24% reduction in the amount of time needed to heal any given amount of damage.

However, medicine is also highly useful during tending, in that a doctor using medicine can often treat multiple small wounds in a single "batch" of tending, but must treat each individually if not using medicine. For patients with a high bleed rate, the difference can easily be life or death. As medicine is a valuable commodity in the early to mid game, this generally means you should conserve it and be careful about what you use it on. Large, bleeding cuts should be prioritized, while burns, frostbite, and bites should be tended with medicine next because of the high infection chance (unless the wounded person is almost dead from blood loss, in that case the smaller cuts should be tended with medicine). Bruises and cracks have no infection chance and should be tended with medicine last. However, note that you cannot select which wound(s) a doctor treats with each tend, so if a colonists has both bleeding or high-infection-risk wounds and bruises, it may still be worth using medicine on the colonist's wounds to ensure the important ones are tended properly.

Disease tending is also very important. Most diseases have a certain amount of severity gained per day, and then a certain amount of severity lost per day when tended. If severity reaches 100%, the colonist (or animal) dies from the disease. The severity lost per day when tended is directly multiplied against the tend quality. Since immunity gain speed is fixed for each specific disease, high tend quality versus low can mean the difference between living and dying to the disease in some cases, especially with older or impaired patients (who have lower immunity case rates). Other diseases (ex. Muscle Parasites) do not gain severity at all (nor immunity), and instead require a certain sum of treatment quality across all tends to the illness before they disappear. Using better-quality medicine gives a substantially higher average tend quality, which can make the diseases disappear substantially quicker.

Also note that surgery is impossible without medicine, and has a much lower base success chance than the equivalent base treatment quality at most levels of the Medicine skill. As such, using the best available medicine, as well as the cleanest surgical environment and highest quality surgical best possible, is very important, often more so than the skill of the surgeon. For example, the difference between a level 10 surgeon (93% base surgery success chance) and a level 20 surgeon (99%) is only a 6.5% gain in surgical success rate. The difference between Herbal Medicine (60% potency) and Glitterworld Medicine (160% potency) is a 167% increase in surgical success rate.

However, note that surgery success rate cannot exceed 98%. All doctors, regardless of skill, medicine, and surgical environment, have at least a 2% chance of failing the surgery. This means that any combination of doctor skill and capabilities, medicine, and surgical environment that results in a 98% or higher surgical success rate is equivalent, and all additional bonuses are wasted.

The same surgery performed by the same doctor in a normal bed (1.0 surgical success chance factor) in dirty room (Cleanliness -0.55, resulting in a 1.0 cleanliness surgical success chance factor) would have a 55.8% chance, 93.0% chance, and 148.8% chance of success, using Herbal Medicine, regular Medicine, and Glitterworld Medicine, respectively. In this case, using Glitterworld Medicine instead of regular Medicine reduces the failure chance of the surgery by 71%!

All surgeries in the base game have a 1.0 or higher multiplier to surgical success rate, though certain surgeries have differing rates of death on failure (ex. removing a Carcinoma has a 25% chance of death on failure). Even aside from the direct death on failure rate, the damage dealt by a surgical failure can completely destroy a body part or organ, which may also result in the colonist's death. Certain mods add surgeries with lower chance of success, which may justify using stronger medicine than would otherwise be required.

The net result is that using higher-end medicine for surgeries is mostly only worthwhile in lower-quality surgical environments (less cleanliness, lower quality hospital beds, lower skilled doctors). Beyond that point, higher-end medicine is more useful for its improved tend quality than its surgical success benefits.

Scars are permanent markers of injuries. They permanently lower the health of the scarred body part, making it easier to damage the affected body part in the future, in addition to reducing the efficiency of that body part proportionally. Body part efficiency is a factor in pawn Capacities. For example, a scarred neck impairs Breathing, which then reduces the pawn's Consciousness, Moving, and Rest Rate Multiplier. The reduction in Consciousness further reduces the pawn's Moving, as well as Manipulation, Eating, and Talking capabilities.

Scars also cause a character a small amount of pain, even if the relevant body part is fully healed. Pain from scars results in a permanent mood penalty for non-masochistic characters. For a colonist with the Masochist trait, scar pain will provide a continual mood bonus instead of penalty.

It is possible to remove the pain from some scars by surgically implanting artificial replacements. Artificial body parts will never scar.

Scars can be treated by luciferium, however the cost of using it usually outweighs the benefit, unless used on numerous scars, or a permanent brain injury.

Another way to work around scar pain is to implement a Painstopper, preventing all ongoing pain. The downside to this, however, is that should the pawn with an installed Painstopper take serious damage - they won't go down until they either lose a leg (or have it heavily injured), or die. Therefore, you should be extra watchful of their health as to decide whether to withdraw them from a controllable scenario (i.e. combat), as to prevent them from losing their life. 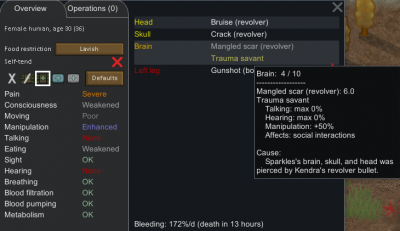 Being shot in the brain can cause the trauma savant condition.

A pawn may become a trauma savant upon taking and surviving an injury to the Brain. Certain capabilities will rise and some will fall.

Trauma Savant removes all ability to socialise, trade, or recruit by capping the pawn's capacity of Talking and Hearing at 0%; In exchange, the pawn's Manipulation is increased by 50%, and they regain full brain function (meaning Consciousness and other functions will be normal) - this is great for doctors, crafters, general workers, and melee combat pawns (all of which rely on Manipulation and are not capped on its usage), but it'll make affected wardens or traders completely useless at that aspect.

There is a 12% chance of any pawn becoming a trauma savant upon receiving brain damage. It does not have to be a humanlike, and can sometimes be seen applied on animals.

While Trauma Savant can be cured, it is difficult and expensive, it is usually better to take advantage of the increased manipulation. To cure Trama Savant you will need a Healer mech serum; however this will heal the brain scarring first, so you have to either use multiple Healer mech serums or first apply Luciferium which will eventually heal all the scarring, at which point you can apply the Healer mech serum when Trauma Savant is the only health negative left.

Brain injuries in Rimworld cause large amounts of pain (20% or higher for a 5 hp wound), which can render a pawn permanently comatose in certain cases. This is a result of the reduction in Consciousness from the pain being added on top of the direct reduction in Consciousness from the brain injury itself due to the reduced part efficiency. However, in real life the human brain has no pain receptors. Despite their perceived location, headaches are usually caused by receptors triggering elsewhere in the head or neck, not by receptors in the brain. Certain types of headaches are due to irritation or swelling in the meninges, which is the membrane enveloping the brain and which does have pain receptors.