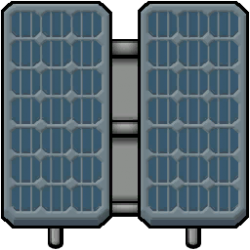 Produces electricity from sunlight. Does not work in the dark or under artificial light.

A solar generator provides up to 1700W of power from sunlight. It has much smaller space requirements than a wind turbine but provides no power at night or during an eclipse. It can be placed in a wind turbine's exclusion zone with no effect on the turbine. Solar generators may be protected by surrounding them with walls, but they must stay unroofed to operate.

Solar generators can be constructed once the Solar panel research project has been completed. They require

Power output is a direct product of the daytime light level. For example, at 50% daylight a solar generator produces 850W of its 1700W maximum. Batteries are a useful supplement to solar generators since they will store power during the day and keep the base online through the night.

Solar generators only operate by the world light level; light from ordinary sources such as a standing lamp or sun lamp will not cause them to generate power. The latitude of your starting position will affect solar cycles, with equator zones giving the strong consistent output and the north pole struggling to reach peak output.

Lightning striking causes it to generate a small amount of power.

Solar generators are "free" energy; once built, they do not need fueling, they simply give and keep giving... while they have sunshine. They do not give their maximum power from start to finish; as daylight grows, the power they provide slowly grows to their full capacity, and then tapers off again back to zero as dusk and night approach. "Daylight" hours start shortly after 0400, with initial power output in single-digit watts, rapidly growing into the low hundreds and up, reaching full power around 0800. Power will begin to drop after 1700, finally reaching 0 watts shortly after 2000, leaving about 8 full hours with zero power from solar sources, and over 7 hours more where the power is less than maximum.

Note that "bad weather" will not reduce the power produced. A solar eclipse will reduce all solar power to 0 watts for the duration of the eclipse, same as the dark of night time. Similarly, a solar flare will disrupt all electrical power for its duration, even if it is not technically "weather".

Placement of the solar generators next to mountains or tall structures does not matter - there are no morning/evening "shadows" from terrain or buildings that make a difference, despite any graphics of long shadows seen in the game. However, shadows caused by any roof or overhead mountain over any part of a generator will reduce the power output proportionally. Clearing such a roof will return a generator to full power, as appropriate.

There are two approaches to account for the "daytime only" power that solar provides, and both are valuable in different ways. The first is to use batteries to provide power while the solar generators are offline. The second is to recognize that not all items need to be powered 24/7, especially during the night. Most electric production benches are only used when colonists are awake, and especially production benches that are not full time such as smelters, crematoriums or nutrient paste dispensers can easily do their job during daylight hours and colonists can simply wait until then to use them. Heaters and coolers can be set on high during daylight and then the indoor temperatures allowed to drift back toward "outdoors" at night, but even with double-wall insulation this may not be acceptable to the colonists' moods, and at least some additional independently powered temperature control may be desired.