This guide details how to survive in one of the most hostile environments in Rimworld - an extreme desert.

Extreme deserts are even hotter than a regular desert. Temperatures can be high enough to cause heatstroke for colonists that are not dressed for hot weather.

It is important to consider the terrain of your extreme desert. The main two options are flat maps and hilly/mountainous maps.

It is not recommended to pick flat maps near the sea since they have less area available for building and the water cannot be used for fishing. 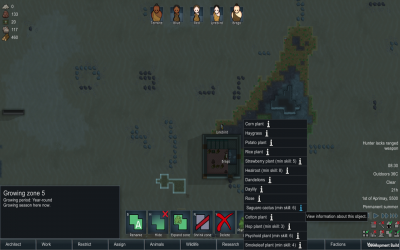 Immediately start growing rice or you won't make it past a week. Rice is not a good choice of crop in poor soil, but they grow fast. Once you have decent food stocks, replace this with potatoes as they perform better in poor soil.

Somewhere around your fifth day, your colony will have no food available at all and your only chances for survival will be opening an ancient shrine and hope there is at least one hive that has a spelopede or megaspider to hunt. These creatures will chase any intruder up to some 30 tiles away from their hive so they won't chase you forever, but they are very fast. Since you only start with two short bows and a bundle of pila, it is still possible to hunt without harm but will require good concentration and familiar tactic knowledge of kitting. To kite, means having a fast bait run towards a direction where nobody else is, while at the same time, the others shoot at the chasing creature. Use the Plan grid to draw their attack range.

If you are lucky, the same moment you need to open the ancient shrine will coincide with the timing of your first newcomer who might be better equipped to hunt, most likely a pistol. Which means you can go to up a max of four hunters. One more mouth to feed but safer hunting. The newcomer may likely as well arrive with some packaged survival meal, but it won't be enough for more than a day.

Insect jelly will start spawning, which will become another nutritional source, and this one never rots. But, hives will live so long as there is a guardian keeping maintenance, and if you kill them all, they will stop producing jelly. Soon after, by the time you might be picking them up. Glow pods will appear too, replacing torch lamps. It is possible to sneak in every night and steal the jelly as a steady source of food. While not risk free, this avoids killing them which both can be dangerous and removes a potential food source.

Animal herds may also help you survive from starvation.

Check your rice plantation periodically, as the plant can be harvested as early as 66% growth. While it may not yield much food, it's still better than nothing.

Check on the few agaves, they may be ready for harvest by now.

Check if any other life form has ventured to your territory.

Reached your first 100% ready harvest? Congratulations, you made it! 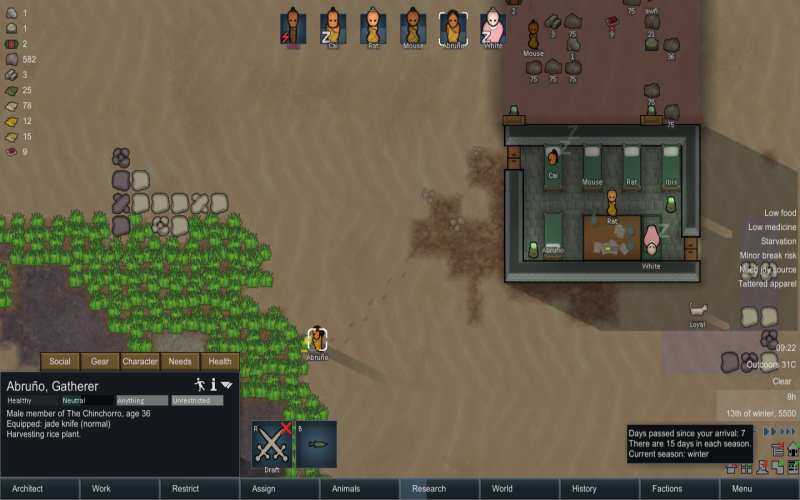 Managed to reach your first 100% harvest ready means you made it!!! 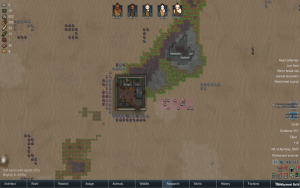 Stone lined up as primitive 1st line of defense

Due to the lack of trees, instead of using wood (Saguaro cactus provide merely 13 wood), it is best to build with steel as there's abundance in comparison, so it is wise to start mining this resource before you need them. Later on after researching stonecutting, you can upgrade to stone. This also means that you can already start hauling stone chucks from before construction the stonecutting bench, so that once you can start producing stone blocks all the raws are gathered close and not still scattered across the map. While doing this, use the dumping zones to line them up as your most primitive line of defense.

Those in high elevation areas should start caving in. During this process you may likely strike other minerals, which are slower to mine. But their empty space will do better for laying out a proper cave system, otherwise you will find yourself mining too much when going after said minerals gaining more work afterwards with the increasing need to build walls where those minerals were located to avoid mountain roof collapse.

Remember that ancient shrine? That room can also be used to build more facilities.

Did you notice winter temperature is around 30 Celsius? Imagine peak summer time. Double time on research to get electricity. Lucky if you have a night owl in the team.

Summer is going to start soon, and while the season itself is not a threat, heat wave is as it rises temperature up to 60 degrees Celsius. You will need to build passive coolers which require 50 wood each so that your colony doesn't die of heatstroke. Any temperature below 30 degrees Celsius will allow your people to recover at night.

Base relocation or upgrade

After you have gone past your first heatwave, it's time to make life more comfortable so that none of your people are psychologically nor emotionally disturbed. Try to make the most of the whole map with as less effort as possible. And the rest it's up to you. Good luck!