A heavy automatic turret. Its large-caliber shells do heavy damage over significant ranges, but its barrel must be refurbished after use. It cannot fire at close-up targets, and may explode when damaged.

The autocannon turret is a defense structure that fires a burst of medium-damage shells. It has a maximum range of 32.9 tiles, but a per-tile accuracy of only 96% and cannot hit enemies within an 8.9 tile radius. Despite its damage, the autocannon's stopping power is almost non-existent, not even being able to stagger humans - the same is also true for the uranium slug turret.

Since autocannons are large 2x2 structures, ranged attacks are twice as accurate against them.

It is built with

After firing 90 rounds it requires a barrel change to be performed by a hauler, costing:

Autocannon turrets have a chance to explode when they drop below 20% health, dealing damage to everything in a large radius. 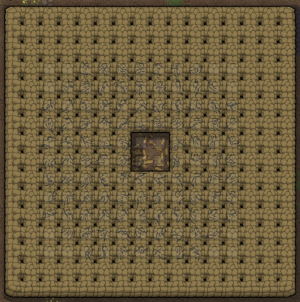 Radius of autocannon turret explosion. Note the slight offset from the 'true' center of the turret.

It can be useful in killboxes where it is more likely to hit, by bringing enemies closer together and putting them in range, but otherwise its use is not cost-effective in an open field as its low accuracy makes it unlikely to land shots at range, and it costs quite some steel for each shot.

Due to their damage output, autocannons can be effective at mowing down lancers when grouped, provided you can lure them within its effective range, otherwise the autocannons will have trouble hitting them. Autocannons are also somewhat effective at dishing out damage against large targets such as centipedes since the accuracy bonus from their body size significantly offsets the autocannon's lower accuracy, though centipede weapons can make relatively short work of autocannons too.

As of version 1.3.3117, despite displaying in the mouse-over box as benefiting from cover, empirical testing demonstrates that this is false and autocannon turrets do not benefit from cover at all.