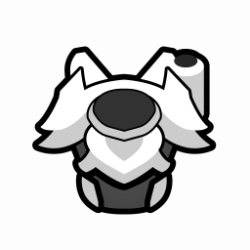 A variant of cataphract armor with a shoulder-mounted flamebolt launcher. This armor is slightly less protective than standard cataphract armor against normal damage, but is especially flame-resistant. The flamebolt launcher has very limited ammo and must be reloaded after use.
Phoenixes specialize in clearing out very confined spaces full of enemies, as in underground or shipborne operations. They can absorb hits while moving down a corridor, fill rooms with flame, and emerge from the smoke unscathed.

Phoenix armor is a type of advanced apparel (armor) introduced by the Royalty DLC that can effectively block gunshots, cuts, blunt trauma, and especially burns. It is a variant of Cataphract armor forms a full set of armor along with the Cataphract helmet.

Alternatively, the armor can be received as a quest reward or purchased from traders. It is currently unknown if any pawns or raiders spawn with the armor.

While less protective against sharp and blunt attacks compared to the base cataphract armor, it is much more protective against heat and temperature extremes. It also gives the user the ability to launch up a large incendiary grenade at will before requiring a reload. This weapon is similar to an incendiary launcher but with a shorter range, significantly larger area of effect but it does not take up a weapon slot. This can be useful to give the user flexibility in combat, such as giving snipers a crowd control option.

The armor contains an integrated flamebolt launcher similar to an Incendiary launcher but which does not prevent the wearer from using another weapon nor a utility item. This flamebolt moves slower and has less range than an incendiary launcher but ignites a a 5x5 square rather than a 3x3 cross. One flamebolt can be launched before the launcher must be reloaded with 40 chemfuel. The process takes 60 ticks (1 sec). The pawn will never automatically use the launcher - instead it must be manually activated by the player similar to Utility items. It is unclear if this restriction also applies to NPCs.

When wearing a shield belt, only adjacent squares (including diagonals) can be targeted with the launcher, meaning that self-immolation is inevitable. However, the heat armor offered by phoenix armor means that the damage to the user will be small, making it a dangerous but potentially useful option in emergencies. 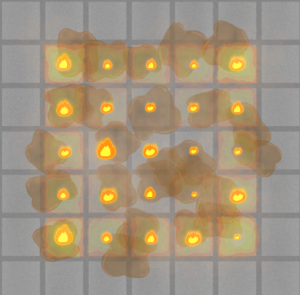 5x5 area of effect of the integrated launcher

Phoenix armor may have the most complex single step crafting recipe in the game, with 6 different ingredient types required.