From RimWorld Wiki
Revision as of 14:53, 23 October 2013 by Malganis75 (talk | contribs) (Created page with "Colonists are the new people of each RimWorld colony. Each colonist has specific skills, limitations set and a character background. In general, colonists are every human exce...")
(diff) ← Older revision | Latest revision (diff) | Newer revision → (diff)
Jump to navigation Jump to search

Colonists are the new people of each RimWorld colony. Each colonist has specific skills, limitations set and a character background. In general, colonists are every human except for raiders/travelers/prisoners. The colonists come in various outfits based on their background, which can be seen by looking at the ____ tab in game.

Upon creating a new colony, a screen where 3 colonists can be randomized individually is shown. Each of the colonists has a name, an age, a backstory, limitations, traits, and skills. The name, age, and traits all seem to not have any effect on the colonist. 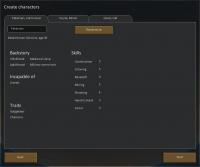 Each colonist will have two parts to their backstory: childhood and adulthood. Each trait has a small story to go along with it, with the name of the colonist filled in for each story. Each different backstory has different effects on the colonist such as: increasing stats, decreasing stats, and disallowing certain tasks. Such information is important to consider when creating the first three colonists for the new colony, as future colonists can sometimes be hard to come by.

The game starts of with three colonists being dropped in on escape/transfer pods (as can be somewhat seen on the right) on the map. This is how the majority of colonists are introduced onto the map, although some will also walk into the map from the border. Colonists have a wide variety of outfits based on their job, which is determined by their backstory. In general the less manual-oriented colonists will have lab coats on, while the more labor-intensive colonists will wear a solid color.

Entrepreneur colonist equipped with a pistol

The overview screen allows the setting of what tasks each colonist is allowed to perform. Colonists will have a natural aptitude at a task, and have no checkboxes for tasks they are unable to perform. The priority of the tasks is preset, and can't be changed. An example of this can be seen below.